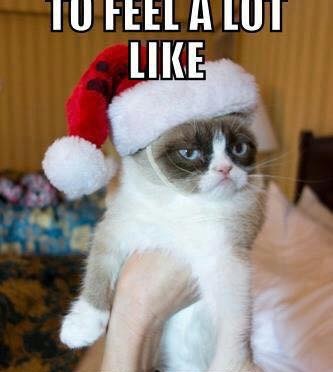 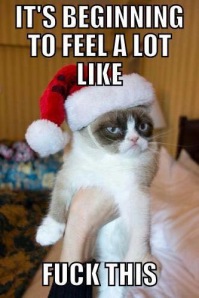 I am resolutely and completely unprepared for the holiday season. It was mid-October when I saw the first banners go up around the shopping plaza, and at that time, it just pissed me off. Rampant consumerism gone mad! Adding an extra six week weeks to the shopping season, and jumping the gun ahead of my favorite holiday. Halloween hadn’t even come and gone yet. Cool your fucking jets! 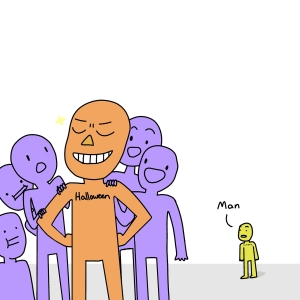 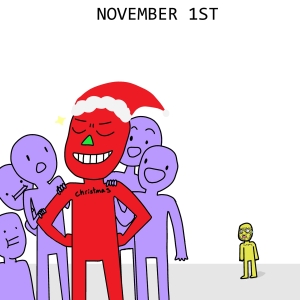 Thanksgiving, it would seem, is never going to get its just desserts.

As we lapsed into November, each subsequent display of green and red further wore down my resolve. This is it, I said to myself, there’s no help for you now. The holiday season has come. At that point, I gave up the fight, but still, I could not for the life of me muster any semblance of the holiday spirit. Every ringing Salvation Army bell was an assault on my senses, the familiar sounds of carols on the supermarket PA system was a dirge amid the cacophony of early Christmas shoppers. As friends and coworkers began to discuss plans for holiday parties, I felt myself withdraw further, immediately exhausted by the mere suggestion of any such gathering.

However, that the space within my mind was still no refuge. The halls within were likewise decked – not so much dancing with pictures of sugar plums, but lined with lists of holiday shopping to be done, Christmas and Hanukkah cards that would need to be mailed, of phone calls home that would need to be dialed. Will I be able to host a Yuletide ritual this year (we are a multi-faith family, in case you couldn’t tell)? Where is the money coming from to finance our gift-giving this year, sparse though it may be? And there, lingering in the dark was the Ghost of Christmas’ Past, waiting for her due consideration.

My hanai-mom uses the phrase “raised by wolves” to describe my (and hers, and several others whom she knows) traumatic upbringing. If you are also part of this Wolf Tribe, then you already know – shit goes down at Christmas time. It is a long known and veritable fact. The fat man in red comes out to play, and your ears perk up like a hunted animal, the fight or flight instinct activated. Sirens going off. It’s all hands on deck. You are battle ready. Despite the fact that Christmas was, by all rights, a HUGE holiday in our house – huge, like, decorations to rival the North Pole’s greatest and finest – the holiday season was fraught. How could it not be? You take a home already stressed to its limit with individuals suffering from various mental illnesses and addictions, add some crippling debt and social compulsions, cook over the boiling mass of the November-December months, and whattaya get? It’s not good, let me tell you.

Still, I look back on those Christmases and I wish I could bring some of the fervor back. Christ, did my mom have fervor. She did the Christmas thing like it was her job. I actually would have liked to carry on that portion of the family tradition, but have been stymied, in part because all of her decorations were misplaced or destroyed over the years, and in part because, well, bah-hum-bug! I seem to have inherited and, over time, nursed my old man’s Ebenezer Scrooge attitude. Every year, I find myself bah-hum-bugging earlier and more often. It’s ironic, in a way, for how often I railed against my dad’s anti-holiday-cheer campaign when I was little. Looking back I think it was, on his part, very good-natured, though it really bothered me at the time. I loved the holiday season so completely – I loved being on break from school so I could spend time with my parents, I loved the cookie baking, the present wrapping, the tree-trimming – all the best parts that didn’t involve yelling, slamming doors, and sirens.

I suppose that’s why I find each year’s initial encounter with the Ghost of Christmas’ Past so exhausting. Each year I am reminded of what I would like to bring back for my daughter – the good stuff – and what I must strive, every day, to avoid. Perhaps this, too, is why folks with depression and other mood disorders find the holidays especially taxing. Though I have come to learn in the past few years that the oft-quoted statistic of increased suicides during the winter months is inaccurate, it seems to me that (at least anecdotally) the population does tend to struggle a little more during this time.

Self-care is important all year-round, of course, so don’t forget that there are resources available to you if you feel like you’re slipping through the cracks. Perhaps this year would be a good time to discuss openly and candidly that while suicide doesn’t necessarily increase in incidence over the holidays, the Holiday Blues are not to be trifled with — we all struggle, and I suspect that we all have feelings of loss associated with this time of year. If you also find this to be true, please take care; should the clock strike one on a cold winter’s night and you come face to face with the spectre of your own Christmas’ Past, do not fear. Greet her, and let her show you what you may have missed, what you may want to carry back. 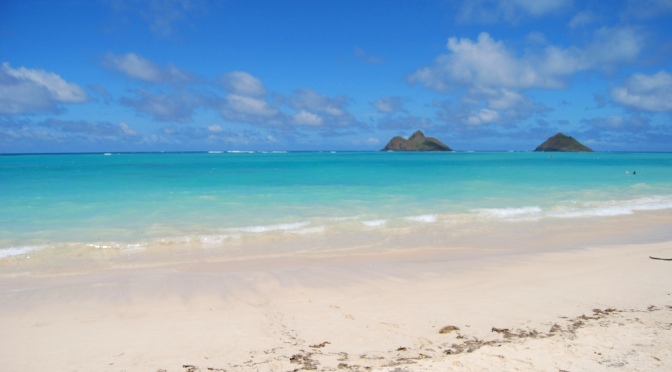 Today was your birthday. You would have been 59. I couldn’t bring you a card, or cake, or flowers, so I brought to you your legacy — a little girl with the same turn of jaw and curve of chin. We turned East and drove to that beach where you rest, to those waters that are now your arms, and legs, and laughing mouth, to that sand that is now your hands and feet. I couldn’t see you, I couldn’t feel you, but I prayed to God that you were there.

Moira was a little scared at first, like she is when she meets a stranger. I sat with her at the outer limits of the surf as the waves drifted slowly in and you tickled her toes, wet her hair. You whispered to her quietly, confidentially through the waves. She picked up wet, sloppy handfuls of sand and squeezed them delightfully through her fingers, and I imagined that she was squeezing your hand. She stomped her feet in an oncoming wave, and I pictured her dancing with you. We walked into the water, past the shorebreak, and into the crisp blueness to sing you Happy Birthday, and I imagined your arms around us, holding us. It was the very best I could do.

I opened my hands underneath the waves, closed my eyes, and prayed, much as I have done every time I have visited this place. Let her be here, let her come. Let there be a touch, let me be open, let there be something.

I heard Moira laughing as she played with her daddy in the water. I felt the waves ripple past my skin, warmed and cooled in turn by the sun and the afternoon’s breeze. I waited, but the supernatural evaded me, as it is wont to do.

Closing my hands, I brought them up out of the water, and opened them toward Moira. She smiled in that way that proves she was born for her Hawaiian name — Kealohi, The Light. “Hau`oli Lā Hānau, Meemaw Janis,” I said, sing-song for us both, before turning to go home. 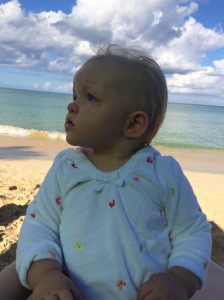